Number of Bilateral Trade Agreements, by the Number of Provisions Covered (2000-2015) 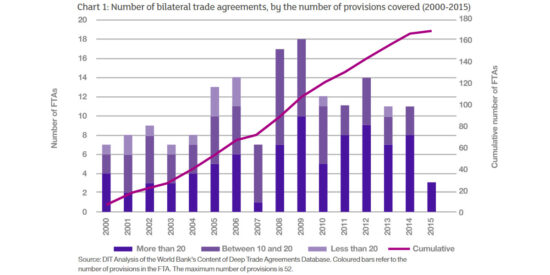 Number of Bilateral Trade Agreements, by the Number of Provisions Covered (2000-2015)

The number of free trade agreements (FTAs) around the world has grown substantially in recent decades (Chart 1).

FTAs can vary in their scope and level of ambition. Less complex agreements focus more on trade in goods and the elimination of tariffs. Over time the scope and depth of FTAs has generally grown, including provisions addressing trade in services and investment. FTAs increasingly address domestic policies inhibiting trade and investment, known as “behind the border” barriers.

Have your say on Number of Bilateral Trade Agreements, by the Number of Provisions Covered (2000-2015)
Latest News
©2019 Latest News
«»