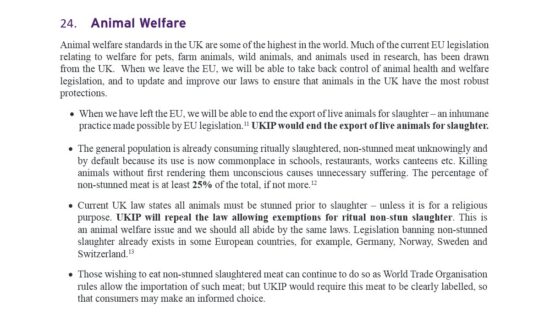 Animal welfare standards in the UK are some of the highest in the world. Much of the current EU legislation relating to welfare for pets, farm animals, wild animals, and animals used in research, has been drawn from the UK. When we leave the EU, we will be able to take back control of animal health and welfare legislation, and to update and improve our laws to ensure that animals in the UK have the most robust protections.

• The general population is already consuming ritually slaughtered, non-stunned meat unknowingly and by default because its use is now commonplace in schools, restaurants, works canteens etc. Killing animals without first rendering them unconscious causes unnecessary suffering. The percentage of non-stunned meat is at least 25% of the total, if not more.(12)

• Current UK law states all animals must be stunned prior to slaughter – unless it is for a religious purpose. UKIP will repeal the law allowing exemptions for ritual non-stun slaughter. This is an animal welfare issue and we should all abide by the same laws. Legislation banning non-stunned slaughter already exists in some European countries, for example, Germany, Norway, Sweden and Switzerland.(13)

• Those wishing to eat non-stunned slaughtered meat can continue to do so as World Trade Organisation rules allow the importation of such meat; but UKIP would require this meat to be clearly labelled, so that consumers may make an informed choice.

11 Exemptions would be the export of live animals from Northern Ireland across the border to the Republic of Ireland, or for racehorses internationally, or rare animals for breeding etc.
12 The Barbarity of Ritual Slaughter of Animals in the European Union. Gerard Batten MEP. Page 7. Jan 2018
13 Such a ban is supported by such animal welfare bodies as the RSPCA and the Royal College of Veterinary Surgeons, as well as Governments Farm Animal Welfare Committee.