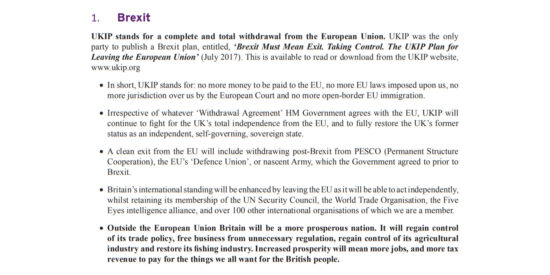 UKIP stands for a complete and total withdrawal from the European Union. UKIP was the only party to publish a Brexit plan, entitled, ‘Brexit Must Mean Exit. Taking Control. The UKIP Plan for Leaving the European Union’ (July 2017). This is available to read or download from this website

• In short, UKIP stands for: no more money to be paid to the EU, no more EU laws imposed upon us, no more jurisdiction over us by the European Court and no more open-border EU immigration.

• Irrespective of whatever ‘Withdrawal Agreement’ HM Government agrees with the EU, UKIP will continue to fight for the UK’s total independence from the EU, and to fully restore the UK’s former status as an independent, self-governing, sovereign state.

• A clean exit from the EU will include withdrawing post-Brexit from PESCO (Permanent Structure Cooperation), the EU’s ‘Defence Union’, or nascent Army, which the Government agreed to prior to Brexit.

• Britain’s international standing will be enhanced by leaving the EU as it will be able to act independently, whilst retaining its membership of the UN Security Council, the World Trade Organisation, the Five Eyes intelligence alliance, and over 100 other international organisations of which we are a member.

• Outside the European Union Britain will be a more prosperous nation. It will regain control of its trade policy, free business from unnecessary regulation, regain control of its agricultural industry and restore its fishing industry. Increased prosperity will mean more jobs, and more tax revenue to pay for the things we all want for the British people.