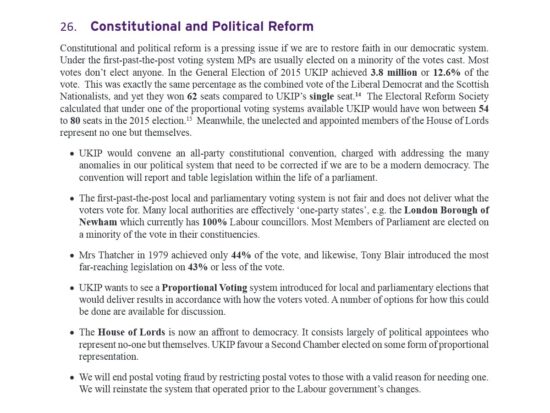 Constitutional and political reform is a pressing issue if we are to restore faith in our democratic system. Under the first-past-the-post voting system MPs are usually elected on a minority of the votes cast. Most votes don’t elect anyone. In the General Election of 2015 UKIP achieved 3.8 million or 12.6% of the vote. This was exactly the same percentage as the combined vote of the Liberal Democrat and the Scottish Nationalists, and yet they won 62 seats compared to UKIP’s single seat.(14) The Electoral Reform Society calculated that under one of the proportional voting systems available UKIP would have won between 54 to 80 seats in the 2015 election.(15) Meanwhile, the unelected and appointed members of the House of Lords represent no one but themselves.

• UKIP would convene an all-party constitutional convention, charged with addressing the many anomalies in our political system that need to be corrected if we are to be a modern democracy. The convention will report and table legislation within the life of a parliament.

• The first-past-the-post local and parliamentary voting system is not fair and does not deliver what the voters vote for. Many local authorities are effectively ‘one-party states’, e.g. the London Borough of Newham which currently has 100% Labour councillors. Most Members of Parliament are elected on a minority of the vote in their constituencies.

• Mrs Thatcher in 1979 achieved only 44% of the vote, and likewise, Tony Blair introduced the most far-reaching legislation on 43% or less of the vote.

• UKIP wants to see a Proportional Voting system introduced for local and parliamentary elections that would deliver results in accordance with how the voters voted. A number of options for how this could be done are available for discussion.

• The House of Lords is now an affront to democracy. It consists largely of political appointees who represent no-one but themselves. UKIP favour a Second Chamber elected on some form of proportional representation.

• We will end postal voting fraud by restricting postal votes to those with a valid reason for needing one. We will reinstate the system that operated prior to the Labour government’s changes.