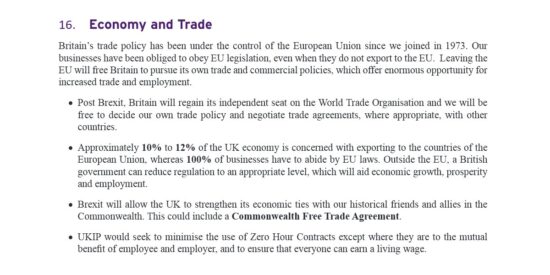 Britain’s trade policy has been under the control of the European Union since we joined in 1973. Our businesses have been obliged to obey EU legislation, even when they do not export to the EU. Leaving the EU will free Britain to pursue its own trade and commercial policies, which offer enormous opportunity for increased trade and employment.

• Post Brexit, Britain will regain its independent seat on the World Trade Organisation and we will be free to decide our own trade policy and negotiate trade agreements, where appropriate, with other countries.

• Approximately 10% to 12% of the UK economy is concerned with exporting to the countries of the European Union, whereas 100% of businesses have to abide by EU laws. Outside the EU, a British government can reduce regulation to an appropriate level, which will aid economic growth, prosperity and employment.

• Brexit will allow the UK to strengthen its economic ties with our historical friends and allies in the Commonwealth. This could include a Commonwealth Free Trade Agreement.

• UKIP would seek to minimise the use of Zero Hour Contracts except where they are to the mutual benefit of employee and employer, and to ensure that everyone can earn a living wage.