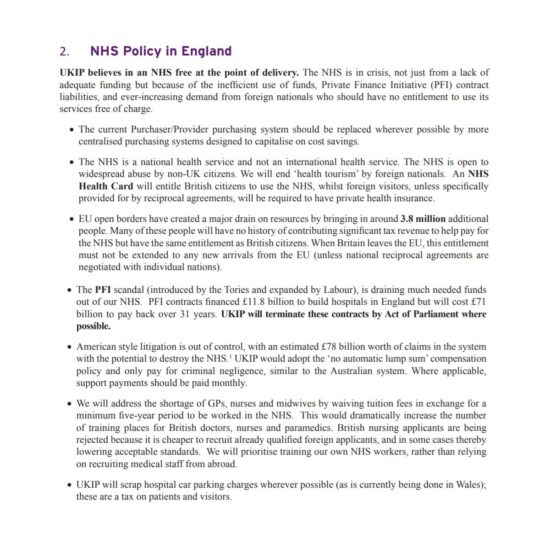 UKIP believes in an NHS free at the point of delivery. The NHS is in crisis, not just from a lack of adequate funding but because of the inefficient use of funds, Private Finance Initiative (PFI) contract liabilities, and ever-increasing demand from foreign nationals who should have no entitlement to use its services free of charge.

• The NHS is a national health service and not an international health service. The NHS is open to widespread abuse by non-UK citizens. We will end ‘health tourism’ by foreign nationals. An NHS Health Card will entitle British citizens to use the NHS, whilst foreign visitors, unless specifically provided for by reciprocal agreements, will be required to have private health insurance.

• EU open borders have created a major drain on resources by bringing in around 3.8 million additional people. Many of these people will have no history of contributing significant tax revenue to help pay for the NHS but have the same entitlement as British citizens. When Britain leaves the EU, this entitlement must not be extended to any new arrivals from the EU (unless national reciprocal agreements are negotiated with individual nations).

• The PFI scandal (introduced by the Tories and expanded by Labour), is draining much needed funds out of our NHS. PFI contracts financed £11.8 billion to build hospitals in England but will cost £71 billion to pay back over 31 years. UKIP will terminate these contracts by Act of Parliament where possible.

• American style litigation is out of control, with an estimated £78 billion worth of claims in the system with the potential to destroy the NHS.(1) UKIP would adopt the ‘no automatic lump sum’ compensation policy and only pay for criminal negligence, similar to the Australian system. Where applicable, support payments should be paid monthly.

• We will address the shortage of GPs, nurses and midwives by waiving tuition fees in exchange for a minimum five-year period to be worked in the NHS. This would dramatically increase the number of training places for British doctors, nurses and paramedics. British nursing applicants are being rejected because it is cheaper to recruit already qualified foreign applicants, and in some cases thereby lowering acceptable standards. We will prioritise training our own NHS workers, rather than relying on recruiting medical staff from abroad.

• UKIP will scrap hospital car parking charges wherever possible (as is currently being done in Wales); these are a tax on patients and visitors.