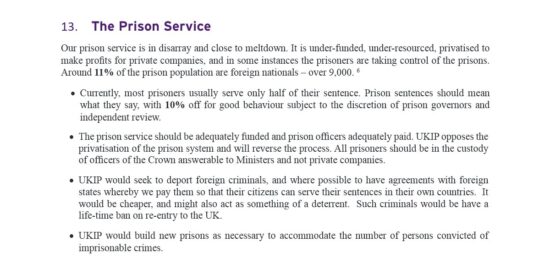 Our prison service is in disarray and close to meltdown. It is under-funded, under-resourced, privatised to make profits for private companies, and in some instances the prisoners are taking control of the prisons. Around 11% of the prison population are foreign nationals – over 9,000.(6)

• Currently, most prisoners usually serve only half of their sentence. Prison sentences should mean what they say, with 10% off for good behaviour subject to the discretion of prison governors and independent review.

• The prison service should be adequately funded and prison officers adequately paid. UKIP opposes the privatisation of the prison system and will reverse the process. All prisoners should be in the custody of officers of the Crown answerable to Ministers and not private companies.

• UKIP would seek to deport foreign criminals, and where possible to have agreements with foreign states whereby we pay them so that their citizens can serve their sentences in their own countries. It would be cheaper, and might also act as something of a deterrent. Such criminals would be have a life-time ban on re-entry to the UK.

• UKIP would build new prisons as necessary to accommodate the number of persons convicted of imprisonable crimes.