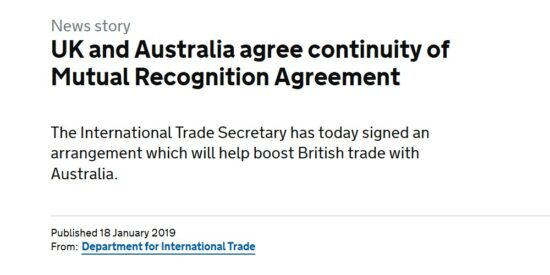 The International Trade Secretary has today signed an arrangement which will help boost British trade with Australia.

An arrangement which helps boost British trade with Australia will continue when the UK leaves the European Union, supporting jobs in both countries.

The Mutual Recognition Agreement on Conformity Assessment (MRA) was signed by the International Trade Secretary and the Australian High Commissioner to the UK in London today (Friday 18 January).

The agreement maintains all relevant aspects of the current EU-Australia MRA. It helps facilitate trade flows between the two nations and means UK exporters can ensure goods are compliant with Australian technical regulations before they depart the UK, saving businesses time, money and resources. Australian exporters to the UK benefit in the same way.

Total UK exports in sectors covered by the deal are worth an estimated £2 billion. Today’s signing marks a crucial step in the important trading relationship between the UK and Australia, one of the world’s fastest growing economies.

Today’s signing will ensure UK and Australian businesses can continue to benefit from existing arrangements for mutual recognition as they do currently, even if the UK leaves the European Union without an agreement.

On top of this, the UK and Australia have both committed to seeking a new ambitious, comprehensive free trade agreement that will allow UK and Australian companies to enjoy an even closer trading relationship after the UK leaves the European Union.

The agreement covers sectors accounting for an estimated 34% of UK goods exports to Australia, including key industries such as the automotive sector where total trade between the UK and Australia was worth over £850 million on average in the five years to 2017.

The deal will also help protect key growth sectors such as the UK’s health tech industry with British medicinal supply exports to Australia worth an estimated £437 million over the same period.

This deal has been welcomed by EEF, the manufacturers’ organisation, which collectively represents 20,000 companies of all sizes, from start-ups to multinationals, across engineering, manufacturing, technology and the wider industrial sector.

The UK and Australia will today also sign an agreement today which will provide further certainty to the UK wine industry post-Brexit.

This agreement, which allows trade in wine to continue between the two countries, also covers winemaking techniques, labelling and certification requirements. It will allow around £250 million of Australian wine to continue to enter the UK, providing greater choice to consumers, and benefitting many businesses involved in the supply and distribution of wine.

Read Full News Story » Will the UK Lose all EU Trade Agreements in a WTO Brexit?