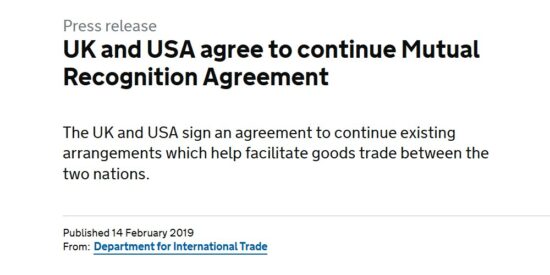 The UK and USA sign an agreement to continue existing arrangements which help facilitate goods trade between the two nations.

An arrangement which helps boost British trade with the US will continue when the UK leaves the European Union, supporting jobs in both countries.

The agreement will maintain all relevant aspects of the current EU-US MRA when the EU-US agreement ceases to apply to the UK. It helps facilitate goods trade between the two nations and means UK exporters can continue to ensure goods are compliant with technical regulations before they depart the UK, saving businesses time, money and resources. American exporters to the UK benefit in the same way.

Total UK-US trade in sectors covered by the deal is worth up to £12.8 billion, based on recent average trade flows. Of this, the UK exports covered are worth an estimated £8.9 billion- more than a fifth of total UK goods exports to the US. Today’s signing marks a crucial step in the important trading relationship between the UK and America, the world’s largest economy.

The agreement benefits a range of sectors, including pharmaceuticals. Pharmaceuticals account for around £7.7 billion of UK exports to the US – nearly 18% of total UK goods exports to the US. Other industries that will benefit include the tech sector and telecommunications equipment suppliers.

Similar agreements have been signed in recent weeks with Australia and New Zealand, ensuring continuity and safeguarding revenues for British businesses and consumers.

The UK and the US are the strongest of trading partners and this agreement will allow British and American businesses to keep trading as freely as they do today, without additional bureaucracy.

This agreement has been welcomed by techUK, who represent more than 900 companies and around 700,000 employees in the UK tech sector.

This is a positive step to enable trade continuity with the biggest tech market in the world. Manufacturers value the current agreement so it is very good news that they won’t now have to seek costly alternative arrangements to get approval for products used in high-end manufacturing, smart electronics and consumer devices.

Ensuring stability in this type of agreement is a strong starting point for the UK as we develop trade links with the USA as part of the Government’s support for a new and proactive trade agenda.

Dr Richard Torbett, Executive Director of Commercial Policy: UK and International, at The Association of the British Pharmaceutical Industry said:

The US is already our largest trading partner outside the EU. Trade between the two countries was worth £184 billion in the year ending Q3 2018 (ONS). The US is also the single biggest source of inward investment into the UK.

The UK is prioritising a new Free Trade Agreement with the US after we leave the EU, and we will publish our response to the public consultations about our negotiation approach shortly.

The UK and US have also signed a Mutual Recognition Agreement on Marine Equipment (MRA) today. This will provide continuity of the effect of the EU-US Marine Equipment MRA when the EU-US agreement ceases to apply to the UK. This means that marine equipment manufacturers will continue only to need certification in one jurisdiction before being able to legally place their equipment on both markets and on board both UK and US flagged vessels.

Read Full News Story » Will the UK Lose all EU Trade Agreements in a WTO Brexit?