Campaign to Keep the Ban on Fox Hunting 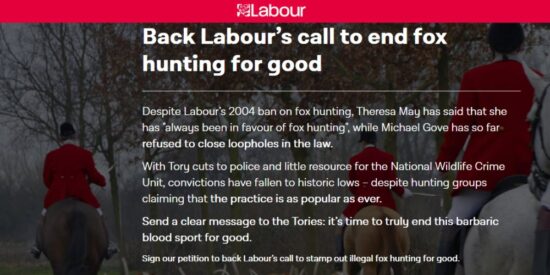 Back Labour’s Call to End Fox Hunting for Good

Back Labour’s Call to End Fox Hunting for Good

Despite Labour’s 2004 ban on fox hunting, Theresa May has said that she has “always been in favour of fox hunting“, while Michael Gove has so far refused to close loopholes in the law.

With Tory cuts to police and little resource for the National Wildlife Crime Unit, convictions have fallen to historic lows – despite hunting groups claiming that the practice is as popular as ever.

Send a clear message to the Tories: it’s time to truly end this barbaric blood sport for good.

Sign our petition to back Labour’s call to stamp out illegal fox hunting for good.

Labour’s vision is for the UK to lead the world with high animal welfare standards in the wild, in farming and for domestic animals. Labour will increase the maximum sentence for those convicted of committing animal cruelty.

We will promote cruelty-free animal husbandry and consult on ways to ensure better enforcement of agreed standards.

We will prohibit the third-party sale of puppies, introduce and enforce a total ban on ivory trading, and support the ban on wild animals in circuses.

We will cease the badger cull, which spreads bovine TB.

Only a Labour government will maintain the bans.