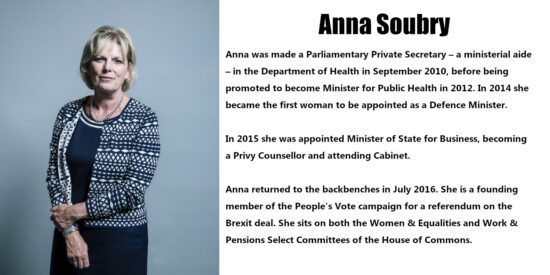 Anna was born in Worksop in North Nottinghamshire in 1956. She first joined the Conservative Party as a student in 1975, and became the first Tory woman on the Executive of the National Union of Students.

She became a broadcast journalist and then a criminal barrister, practising in Nottingham. She first stood for election to the House of Commons in 2005, before winning the seat of Broxtowe at the 2010 General Election, becoming the first women to represent the constituency.

Anna was made a Parliamentary Private Secretary – a ministerial aide – in the Department of Health in September 2010, before being promoted to become Minister for Public Health in 2012. In 2014 she became the first woman to be appointed as a Defence Minister.

In 2015 she was appointed Minister of State for Business, becoming a Privy Counsellor and attending Cabinet.

Anna returned to the backbenches in July 2016. She is a founding member of the People’s Vote campaign for a referendum on the Brexit deal. She sits on both the Women & Equalities and Work & Pensions Select Committees of the House of Commons.