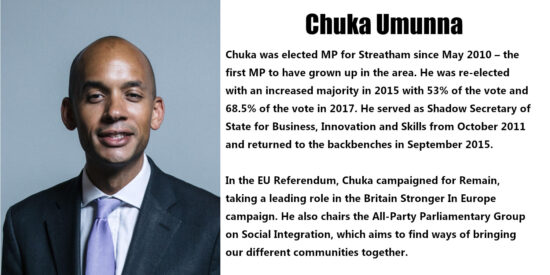 Chuka was born in 1978 to a Nigerian father, who arrived in Liverpool in 1964 aged 23 with one suitcase and no money; and an English-Irish mother, a probation officer and later lawyer who supported her family while Chuka’s father built up his business.

Chuka grew up in Streatham and attended local schools before going on to specialise as a solicitor in employment law.

A lifelong Crystal Palace supporter, Chuka is a patron of the Palace for Life Foundation, the charitable arm of the club, which focuses on working with young people in South London. He is also an ambassador for PRS Foundation, who fund music projects across the UK for new and up and coming artists; and a patron of the Pegasus Opera Company, who create opportunities for young black singers from all backgrounds to develop and perform in innovative opera productions.

Chuka was elected MP for Streatham since May 2010 – the first MP to have grown up in the area. He was re-elected with an increased majority in 2015 with 53% of the vote and 68.5% of the vote in 2017. He served as Shadow Secretary of State for Business, Innovation and Skills from October 2011 and returned to the backbenches in September 2015.

In the EU Referendum, Chuka campaigned for Remain, taking a leading role in the Britain Stronger In Europe campaign. He also chairs the All-Party Parliamentary Group on Social Integration, which aims to find ways of bringing our different communities together.