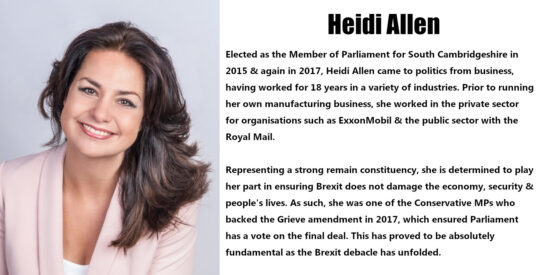 Elected as the Member of Parliament for South Cambridgeshire in 2015 and again in 2017, Heidi Allen came to politics from business, having worked for 18 years in a variety of industries. Prior to running her own manufacturing business, she worked in the private sector for organisations such as ExxonMobil and the public sector with the Royal Mail.

This combination of broad business knowledge, plus a degree in Astrophysics and also in law, means Heidi has been able to represent the diverse interests of her constituency and promote the growth of its small and medium sized enterprises and high-tech industries too. Having grown up in rural Yorkshire, she also understands the rural way of life and the inherent challenges often faced.

Since her election, Heidi has gained a reputation for being an independently minded backbencher, unafraid to speak out in the House of Commons. A member of the Work and Pensions Select Committee, she has influenced the national debate on the funding and delivery of the welfare state, regularly speaking up for families on low incomes and for the disabled. Heidi was the lead campaigner on the Conservative benches and was at the heart of all the funding and structural improvements made to Universal Credit prior to joining the Independent Group.

Representing a strong remain constituency, she is determined to play her part in ensuring Brexit does not damage the economy, security and people’s lives. As such, she was one of the Conservative MPs who backed the Grieve amendment in 2017, which ensured Parliament has a vote on the final deal. This has proved to be absolutely fundamental as the Brexit debacle has unfolded.

Heidi is married to Phil who runs the family manufacturing business. They live in South Cambridgeshire with two cats!