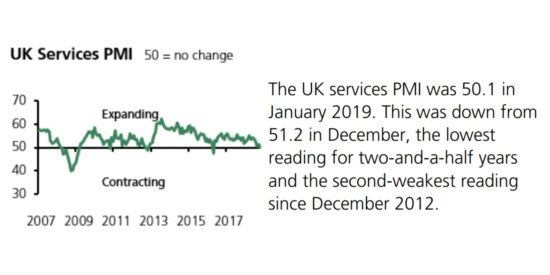 In the Markit/CIPS PMI, a value of 50 means that there is no change compared to the previous month. Values above 50 indicate an expansion, and values below 50 a contraction.

The UK services PMI was 50.1 in January 2019. This was down from 51.2 in December, the lowest reading for two-and-a-half years and the second-weakest reading since December 2012.

Political uncertainty was cited as a prime reason for caution. There was a small fall in employment, combined with higher pay adding to input costs.

Business confidence rebounded slightly from December’s 29-month low, but was still one of the lowest seen since early 2009.