UK Economy in GDP Terms is Equal to 18 EU Economies 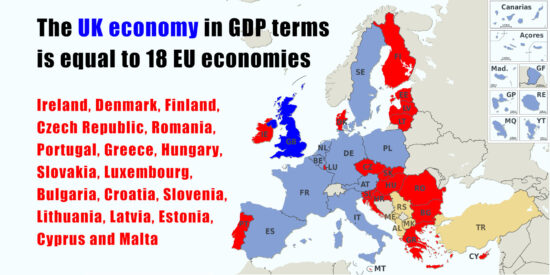 UK Economy in GDP Terms is Equal to 18 EU Economies

You can see in the image above, the UK (in blue) economically is equal to a lot of EU countries economies (in red).

How would this impact the EU economically if all 18 of those countries left the EU on the same day and the EU didn’t manage to negotiate a free trade agreement (FTA) by the end of the Article 50 process!

If things don’t change that could happen with the UK leaving the EU with no Article 50 agreement meaning no EU-UK FTA, EU27 to UK trade and UK to EU27 trade reverts to WTO terms.

That means higher overall tariffs and more trade barriers, this won’t STOP all EU/UK trade, but it will have a negative impact, trade is likely to decrease between the EU27 & UK: how much is an unknown quantity.

What has been missed in the Brexit debate is how important trade between the EU/UK is from BOTH sides, we’ve tended to only hear one side, the Project Fear side: it will be a cliff edge disaster for the UK, the economy will free fall into oblivion worse than the great recession!

It’s OTT scaremonger, no credible economists are making dire predictions like this, but if it was true, it will also be an economic disaster for the EU27 since overall they export more in £ terms to the UK than the UK exports in £ terms to the EU27.

Read Full News Story » How Important is the UK Economically to the EU?