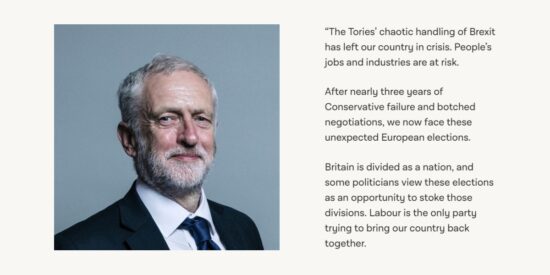 The Tories’ chaotic handling of Brexit has left our country in crisis. People’s jobs and industries are at risk.

Britain is divided as a nation, and some politicians view these elections as an opportunity to stoke those divisions. Labour is the only party trying to bring our country back together.

Whether you voted to Leave or to Remain, our politics needs to change because it is only working for a few at the top – whether in Westminster or in Brussels.

Labour has the policies that will deliver the change our country needs, and will work across Europe to take on the challenges facing our continent.

This Conservative government is too weak and divided to deliver a Brexit deal that meets the needs of our communities, already under huge pressure from years of austerity.

Labour has put forward an alternative plan to seek a close and cooperative relationship with the European Union, including a new comprehensive customs union with a UK say, close single market alignment, guaranteed rights and standards, and the protection of the Good Friday peace agreement in Northern Ireland.

We believe such a deal could bring our country back together and deliver on the result of the referendum. However, the Government has refused to listen and compromise. They have spent more of the last three years arguing among themselves than negotiating a good deal for the people of Britain.

Labour will continue to oppose the Government’s bad deal or a disastrous no deal. And if we can’t get agreement along the lines of our alternative plan, or a general election, Labour backs the option of a public vote.

If the Government is confident that it has negotiated a deal that benefits our economy and our communities then they should not be afraid to put that deal to the public.

Labour has worked across the European Union to improve people’s lives: from delivering rights at work and protecting our environment to taking on the worst excesses of global capitalism.

We will build on those achievements, cooperating closely with our progressive allies in Europe and across the world.

This manifesto highlights Labour’s policies to transform Britain and Europe, for the many, not the few.