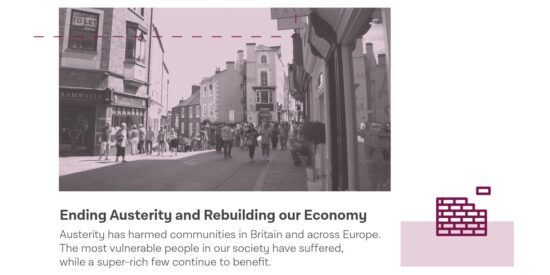 Austerity has harmed communities in Britain and across Europe. The most vulnerable people in our society have suffered, while a super-rich few continue to benefit.

It is time to leave behind the failed conservative and neoliberal economic models of the past.

Labour will take a different approach. We will end austerity, invest in communities, protect our public services, and ensure those with the broadest shoulders pay their fair share.

In the European Parliament, Labour will work to direct EU investment to areas that are struggling.

Labour will work with others to ensure procurement and competition laws work to benefit and encourage investment towards a greener economy and in areas that need investment most.

Labour will only support trade deals that promote human rights, consumer standards, environmental protections, and rights at work. Labour will protect our public services, like the NHS, from being opened up to further privatisation.

Trade policy should be used to raise standards across the world, not to engage in a race to the bottom. We will work with EU partners to protect our industries, like steel, from the dumping of cheap imports, and we will defend UK products against cheap imitations, from Scotch whisky to Welsh lamb and Cornish pasties.

Labour will continue to support EU-wide efforts to close the loopholes, increase transparency, and take action on the tax havens that operate in Europe or with the support of EU countries (like UK overseas territories, where the UK Government has failed to take action).

Labour is also committed to working across Europe to establish a Robin Hood Tax on financial transactions, as a fair way to raise extra revenue to help fund our public services.

Action at EU level would be complemented by our commitment to deliver a National Transformation Fund providing £250 billion of investment benefiting every region and nation of the UK. And we will protect funding for research at UK universities.

Combined with a network of national and regional development banks, this would reverse years of chronic underfunding that has held back communities and industries in too many parts of our country. Under Labour, no region or nation would lose out on funding, and power over decisions affecting investment will be taken in Scotland, Wales and in English regions.

And we will bring our railways, water, energy and mail into public ownership – run for public service not private profit.

Have your say on Labour Manifesto: Ending Austerity and Rebuilding our Economy
Latest News
©2019 Latest News
«»