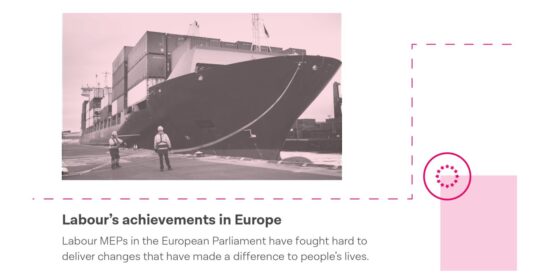 Labour MEPs in the European Parliament have fought hard to deliver changes that have made a difference to people’s lives.

It was Labour that delivered laws to improve people’s lives at work, leading the way in ensuring part-time workers could not be treated less favourably than full-time workers. Labour helped deliver minimum maternity and paternity leave across the EU, and Labour MEPs delivered the working time directive, limiting the hours people are forced to work.

Labour MEPs pushed through the climate package that first recognised the dangers of climate change, and set binding EU-wide targets on reducing emissions and promoting renewable energy. We promoted the very first EU habitats laws, ensuring the maintenance of biodiversity and measures to protect wildlife, including by prohibiting neonicotinoids. And it was Labour that took on big tobacco by introducing new laws on plain packaging and putting a halt to targeting young people.

Labour led the fight against the excesses of the few, delivering a cap on bankers’ bonuses and supporting regulation to curb casino capitalism. Labour also helped deliver an end to rip off mobile phone roaming charges, delivered compensation rights for all passengers on air, land and sea, and access for disabled passengers.

From delivering the Charter of Fundamental Rights to securing the European Arrest Warrant and access to vital databases, which have helped take criminals off our streets, Labour has worked to balance the need to make our country safer, with the duty to protect and promote our human rights.

On equality, Labour has delivered new EU laws banning discrimination in the workplace or in educational establishments on the grounds of race or ethnicity.