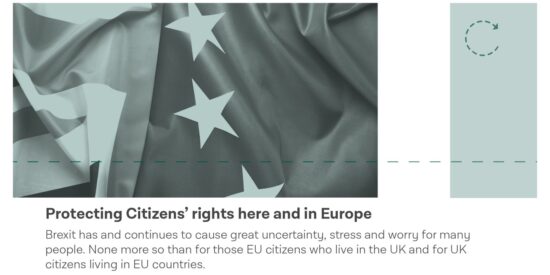 Brexit has and continues to cause great uncertainty, stress and worry for many people. None more so than for those EU citizens who live in the UK and for UK citizens living in Europe, whatever their heritage.

Labour believes that immigration has positive benefits for our communities and economy. Greater diversity and inward investment enriches our culture and enables the new skills and dynamism needed to create economic growth.

Three million EU citizens live in the UK. They are our friends, neighbours and family. It is wrong that they still face any uncertainty when they have contributed so much to our society.

The Windrush scandal shows this Government cannot be trusted to protect citizens’ rights. In both Westminster and Brussels, Labour will commit to fight for the full rights of all EU citizens in the UK and to defend the rights of UK citizens who have chosen to make their lives in the EU.

Labour rejects the Government’s plan to class as ‘unskilled’ any migrant worker earning less than £30,000. This would include nurses, teachers and social care workers who we desperately need. Labour will ensure our NHS and care sector can recruit the staff needed to care for our sick and elderly now and in the future.

Globally, climate change and conflict has brought a desperate migration crisis to Europe’s shores. We must and can do more. The migration crisis is not just a political challenge, but a moral test for all of Europe – which it has failed, as thousands drown each year in the Mediterranean.

Labour will continue to call for the UK to play a bigger role to support fair asylum and migration policies based on shared responsibility and solidarity between nations and people, respecting the rights of, and our duties to, refugees.