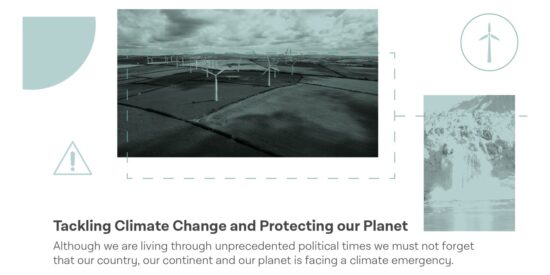 Although we are living through unprecedented political times we must not forget that our country, our continent and our planet is facing a climate emergency.

We cannot afford to put off the action needed to mitigate the threat of climate change, which is already devastating large parts of our planet and threatening our existence.

Labour will fight to make sure the UK is a leader for action in Europe, showing the way for the rest of the world.

We will continue to support a clear commitment to the Paris climate agreement.

At a time when some major economies outside Europe have turned their backs on taking action, it is vital that we in Europe remain fully committed to our climate responsibilities and commitments.

We will demand that the EU follows the pledge of the next UK Labour government, to commit to 60% of the UK’s energy supply from renewable or low-carbon sources by 2030, and net zero carbon emissions by 2050 at the latest. Our plans would make Britain the only developed country outside Scandinavia to be on track to meet our climate change obligations.

Unlike the Tories, Labour will ban fracking – matching action already taken by the Labour Government in Wales.

Labour has the ambition to lead a green industrial revolution on our continent with the aim of making Europe the first zero carbon continent in the world.

We will invest to help make the radical green transition for industry across the UK, while protecting jobs and creating opportunities in the new industries of the future.

Just like climate change, air pollution does not respect national boundaries. We can only tackle it through international action. And the air quality in our major towns and cities is reaching dangerous levels, putting lives at risk.

So in the UK, Labour would introduce a new clean air act, creating a network of clean air zones at home and working towards an ambitious clean transport strategy across the EU to tackle air pollution.

Labour will safeguard habitats and species in the ‘blue belts’ of the seas and oceans. We will set targets for reducing the use of plastics and work with food manufacturers and retailers to reduce waste.