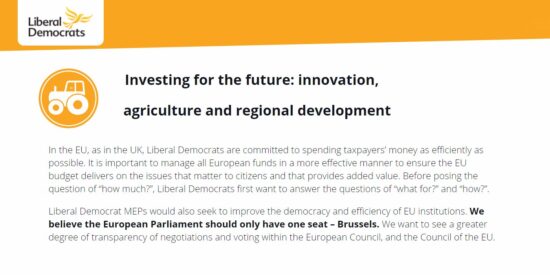 In the EU, as in the UK, Liberal Democrats are committed to spending taxpayers’ money as efficiently as possible. It is important to manage all European funds in a more effective manner to ensure the EU budget delivers on the issues that matter to citizens and that provides added value. Before posing the question of “how much?”, Liberal Democrats first want to answer the questions of “what for?” and “how?”.

Liberal Democrat MEPs would also seek to improve the democracy and efficiency of EU institutions. We believe the European Parliament should only have one seat – Brussels. We want to see a greater degree of transparency of negotiations and voting within the European Council, and the Council of the EU. We also want to ensure that British Members of Parliament hold UK government ministers better to account for the decisions they take on our behalf in Brussels. The Prime Minister and other ministers should make a statement to the House of Commons setting out the objectives of the government before each Council meeting, as well as a statement afterwards, and Parliamentary select committees should lead the scrutiny of European legislation in their specialist areas.

The EU is vital in funding research and facilitating research collaboration across Europe. The EU has given €75 bn between 2014 and 2020 to support Horizon 2020. It has enabled UK scientists to work with partners throughout Europe to improve people’s lives across the EU: tackling climate change, protecting food supplies and improving health and wellbeing. The European Commission wants the funding for Horizon Europe, which runs from 2021 to 2027, to rise to €100 bn. As a member of the EU, the UK would benefit enormously from this extra funding. Outside of it, the UK will have to ‘pay as you go’ to participate in Horizon Europe projects. Liberal Democrats know that we are better off inside the EU where the UK plays a leading role in research and innovation.

We support investments in innovation and research, technological change, security, fighting climate change and protecting the environment and tackling youth unemployment as key priorities for the EU budget. We would like the EU to make greater use of loans or guarantees to mobilise private capital and incentivise innovation.

The EU has played a vital role in supporting UK farmers and protecting the countryside. Under the Common Agricultural Policy (CAP), UK farmers receive much-needed income support; EU funding also supports rural development and environmental improvement schemes. As well as this, the ease of trade with the EU provides a critical export market for British farmers.

We believe that the way in which EU agricultural subsidies are distributed to farmers should be further improved to help meet sustainability goals and maintain income support for farmers who need it. We would substantially reform and rethink agricultural subsidies to ensure the CAP rewards farmers for reducing greenhouse gas emissions towards net zero levels and farming sustainably. We want a streamlined and modern agricultural policy that incentivises innovation, entrepreneurship, generational renewal and sustainability in farming, phasing payments progressively to protect small farms. Support should also be targeted to combat challenges such as antimicrobial resistance, food security, and animal welfare standards, and promote alternative and environmentally friendly agricultural methods. Reforms within the UK should be agreed between the four administrations, by including the Scottish Government, Welsh Government and Northern Ireland Executive in decisions.

Liberal Democrats would defend and maintain Britain’s fishing industry by not allowing fishing rights to be traded away against other policy areas, and work with the industry and other stakeholders to develop a national plan for sustainable fisheries. We will work to improve the Common Fisheries Policy to ensure that it delivers the necessary economic and environmental objectives.

Membership of the EU has been a vital source of support for rural and coastal areas of the UK. EU structural funds have especially benefited Cornwall and Wales where the spend over 2014–2020 has been around £900 and £700 per person respectively. The EU is also one of the largest funders of work to conserve natural habitats and historical sites, which are the backbone of the tourist industry in rural and coastal areas. Staying in the EU would ensure that the UK’s nations and regions continue to benefit from these funds.

The Conservatives have failed to deliver on the promise of the ‘Northern Powerhouse’ and dropped major projects elsewhere. We will continue to champion the Northern Powerhouse and Midlands Engine and invest significant capital resources in infrastructure projects across the North of England and the Midlands.

Even if Brexit is stopped, enormous damage is already being caused by Brexit uncertainty. Liberal Democrats would create an emergency Brexit Support Fund of at least £7.5 billion to support those affected by this uncertainty. This would mitigate job losses, supporting UK workers made redundant as a result of businesses leaving the UK, closing down or downsizing as a result of the impact of Brexit, and offering workers the chance to receive advice or re-training to help them secure employment or start a new business.

Have your say on Lib Dem Manifesto: Investing for the Future: Innovation, Agriculture and Regional Development
Latest News
©2019 Latest News
«»