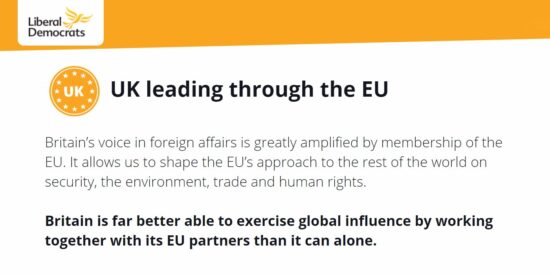 Britain’s voice in foreign affairs is greatly amplified by membership of the EU. It allows us to shape the EU’s approach to the rest of the world on security, the environment, trade and human rights. Britain is far better able to exercise global influence by working together with its EU partners than it can alone.

We wish to see the European Union, acting collectively, continue as a strong actor on the international stage. In a rapidly changing geopolitical environment, the EU should play an important global role, further developing the EU’s immense economic and rule-setting power and growing collective diplomatic capabilities.

In an era of strained defence budgets and costly capability, with Trump’s US less willing to take the lead in Western defence, deeper cooperation is vital if European powers are to retain significant military capabilities to guard against the uncertainties of the future. This requires more strategic thinking and coordination from European NATO and EU member states but with national parliaments continuing to decide on national military deployments and the use of force.

We believe the EU must continue to play its leading role in development cooperation to ensure sustainable development and promote democracy, human rights, peace and security round the world. Liberal Democrats have shown leadership on development by securing the UK’s legal commitment to devote 0.7 per cent of national income to development aid. To use EU member states’ resources in the best possible way, we will strive for a greater focus on the quality of development projects and programmes, and better coordination within the EU. In this way we can promote both Europe’s security interests and our humanitarian values.

We condemn the continued annexation and occupation of Crimea and aggression in East Ukraine by Putin’s Russia, in violation of international law. We call for greater EU support to the democratically elected administration of Ukraine and for the EU to continue its economic sanctions on Russia.

Have your say on Lib Dem Manifesto: UK leading Through the EU
Latest News
©2019 Latest News
«»