Lib Dem Manifesto: Working Together to Tackle the Climate Emergency 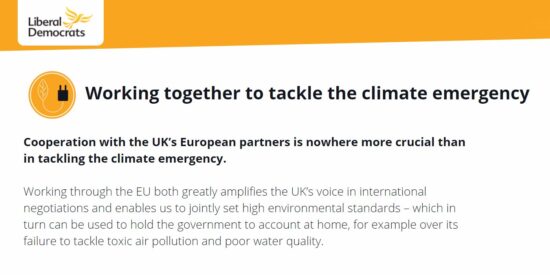 Lib Dem Manifesto: Working Together to Tackle the Climate Emergency

Cooperation with the UK’s European partners is nowhere more crucial than in tackling the climate emergency. Working through the EU both greatly amplifies the UK’s voice in international negotiations and enables us to jointly set high environmental standards – which in turn can be used to hold the government to account at home, for example over its failure to tackle toxic air pollution and poor water quality.

The EU led the world in agreeing the ambitious global climate targets embedded in the Paris Agreement, and as part of the EU we must continue to work to achieve them, including accelerating the deployment of low-emission technologies, infrastructure, vehicles and products and building on Liberal MEPs’ work to ensure that climate objectives are built in to all relevant EU strategies, funds and agencies. Liberal Democrats were the first major political party to call for a zero-carbon Britain; we believe this target must be met by 2045, contributing to a zero-carbon EU by 2050. British strengths in offshore wind, low-emissions vehicles and green finance mean the UK is well placed to foster jobs, growth, and competitiveness at the same time as protecting the environment.

The EU-wide Energy Union helps to make energy more secure, affordable and sustainable. We want to develop it further to encourage more trade in green energy between European countries and greater investment in electricity interconnectors to guarantee energy security. The EU Emissions Trading System, the first of its kind in the world, has cut emissions across the EU, and we will strengthen it, including by extending it to aviation. We would also promote higher EU standards of and greater investment in energy efficiency. We would campaign for an EU-wide ban on fracking because of its negative impacts on climate change, the energy mix and the local environment.

Work by Liberal MEPs has ensured that EU-wide requirements for fuel efficiency have helped make vehicles greener, saving motorists money while also tackling pollution; these should be further strengthened. We support using EU funding to drive innovation in zero-emission and autonomous vehicles and infrastructure such as charging points. We support the development of carbon capture and storage for industrial processes, ‘negative emissions’ technologies and strategies, including ‘natural climate solutions’ such as forestry, and greater resilience for infrastructure and housing against the impacts of climate change such as flooding.

The EU is a global leader in promoting resource efficiency and the protection of oceans and nature. Liberal Democrats will build on this record by reducing the use of plastics, including through a new binding international treaty, and through more ambitious targets for reducing waste and increasing the reuse and recycling of natural resources. We will introduce a general duty of care for the environment and human rights for companies and public sector agencies.

We will establish an ambitious EU-wide action plan on deforestation, including reducing the consumption of commodities associated with the destruction of global forests such as palm oil or soya. We will support greater efforts by the EU to tackle illegal and unsustainable trade in timber, wildlife, ivory, and fish, lead negotiations on a Paris-style agreement to save global biodiversity for future generations and ensure better protection for wildlife, habitats and the countryside.

Have your say on Lib Dem Manifesto: Working Together to Tackle the Climate Emergency
Latest News
©2019 Latest News
«»