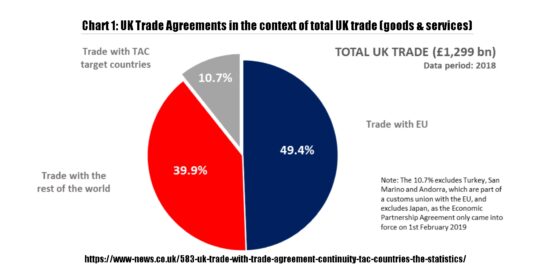 The statistics provided estimate the value of UK trade with countries who are party to trade agreements.

All trade values within this release are taken from the most recent published ONS statistics ‘UK total trade: all countries, non-seasonally adjusted October to December 2018 release’: https://www.ons.gov.uk/businessindustryandtrade/internationaltrade/datasets/uktotaltradeallcountriesnonseasonallyadjusted

The agreements covered in this release exclude Turkey, San Marino and Andorra, which are part of a customs union with the EU, and excludes Japan, as the Economic Partnership Agreement only came into force on 1st February 2019.