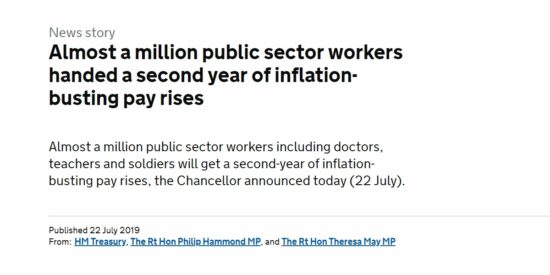 Almost a million public sector workers including doctors, teachers and soldiers will get a second-year of inflation-busting pay rises, the Chancellor announced today (22 July).

Today’s announcements build on the largest pay rise in nearly a decade for over a million public sector workers last year, which included a multi-year deal for NHS nurses.

Whether it’s keeping us safe, saving lives or educating the next generation, our public sector workers deserve this pay rise in recognition of the brilliant job they do on a daily basis.

In 2017 we ended the public sector pay cap and I’m pleased that we can build on this today by giving almost a million of our dedicated public servants an above inflation salary increase.

Public Sector Workers are Getting a Well-Deserved Pay Rise 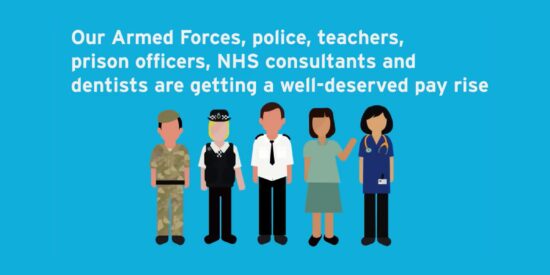 Public Sector Workers are Getting a Well-Deserved Pay Rise

Public sector workers deliver Britain’s world class public services and should be properly rewarded which is why I’m confirming a second year of above inflation pay rises today.

This is in recognition of the hard work of millions of people, including soldiers, teachers and doctors, and will help us recruit and retain the best staff.

We are able to afford these pay rises because our balanced approach means we have reduced our debt while investing in public services, including pay.

Each workforce is different and reaches its own settlement with the government. All six deals finalised today hand pay rises higher than the current 2% rate of inflation (CPI June 2019, ONS) for the 2019/20 financial year.

The pay rises will be backdated to the start of each work force’s financial year and mean a rise of 2.75% for school teachers, 2.5% for consultants and dentists, 2.5% for police officers, 2.9% per cent for personnel in the Armed Forces, at least 2.2% for Prison Officers and 2% for senior Civil Servants and senior military staff.

Independent pay review body recommendations for teachers, consultants and dentists, police officers, prison officers and the Armed Forces are being accepted and announced in full today.