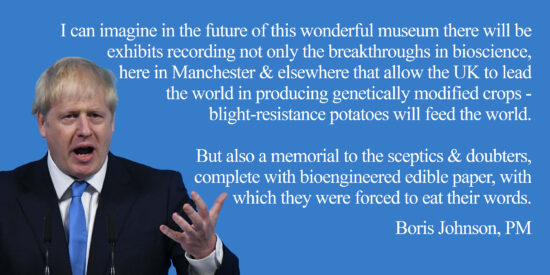 So I can imagine in the future of this wonderful museum there will be exhibits recording not only the breakthroughs in bioscience, here in Manchester and elsewhere that allow the UK to lead the world in producing genetically modified crops – blight-resistance potatoes will feed the world.

But also a memorial to the sceptics and doubters, complete with bioengineered edible paper, with which they were forced to eat their words.

I don’t blame the doubters and the sceptics, but all I will say, is that the evidence is behind us, there’s Stephenson’s rocket behind us, we’re sending rockets into space – we will expand our space programme as well.

I don’t blame the doubters and the sceptics, it’s a natural human instinct, but time and again, they have been proved wrong.

I think they will be proved wrong again.